Google Stadia release is only three short weeks away, yet many elements of the streaming service still sound like a mystery. The official website for Destiny 2 developers, Bungie.net, has added support for logging in via Stadia in preparation for the upcoming release, hinting at the “Stadia Player Portal.”

The title that Google Stadia marketing has been most closely associated with — apart from Assassin’s Creed Odyssey, which acted as the beta test game for the Project Stream — is Destiny 2: The Collection that will be given to all owners of Google Stadia and Premium Edition as part of their Stadia Pro trials. It’s no surprise, given the close relationship, that Destiny 2 would be one of the first games to prepare for Stadia publicly.

Since the release of the original Destiny, Bungie.net has been a portal for players across all platforms for which the game is available, and with the recent launch of Cross-Save for Destiny 2, having the various gaming service accounts linked to one Bungie account is becoming more important.

Bungie announced earlier this week that Stadia would start showing up as an option for both login and cross-save on Bungie.net, but that neither would work until the creation of profiles became available.

Until Stadia profile creation becomes available at a later date, players won’t be able to log in with Stadia nor setup Cross Save with that platform.

That has not prevented us from trying it anyway, though. Immediately choosing Stadia as a login option will take you to the standard Google Account selection page where you pick which of your Google Accounts you would like to use for that task. Digging a little deeper, we found that the requested “scope” was “stadia.profile.”

Following the request, you are (sadly) taken to an error screen with Destiny’s Sweeper Bot stating that your “Google Account must have a Stadia Name attached for use with bungie.net.” Ironically, this new page also suggests you create a Stadia Name through the “Stadia Player Portal” which links to Stadia.com. 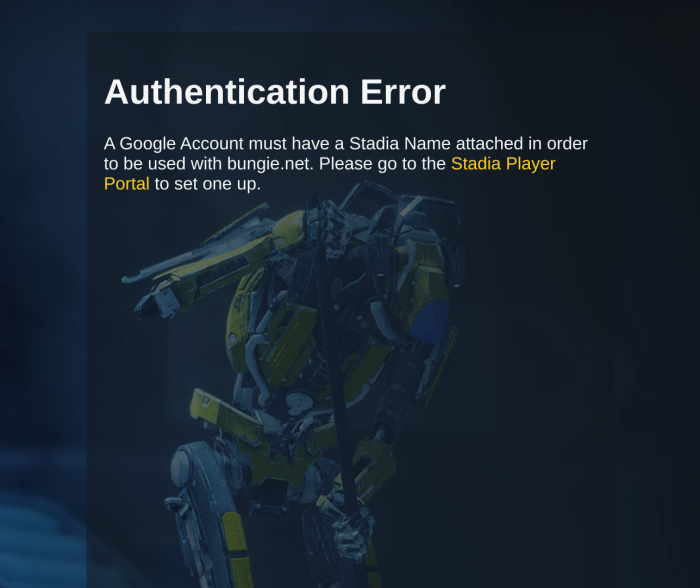 We’ve learned very little about how Google Stadia would work from the web so far, with Stadia.com only redirecting to the Stadia Premiere Edition Google Store page, now that the Founder’s Edition has sold out worldwide. From this new excerpt, we can now confidently infer that through this “Stadia Player Portal” we will be able to manage our Google Stadia profiles on the internet.

In November 2020, decided to add six Stadia Pro games, including  Risk of Rain 2

Young Souls and Phoenix Point will arrive at Stadia next year